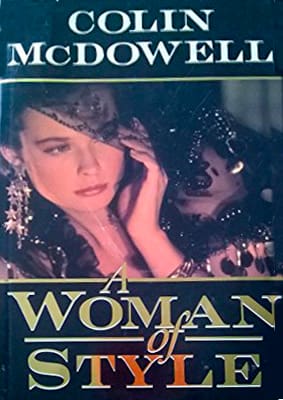 An Assassin’s Story, Style and Humility 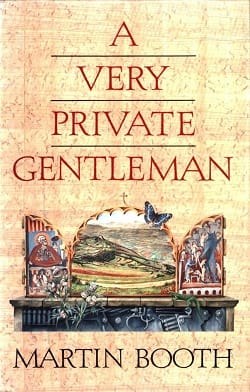 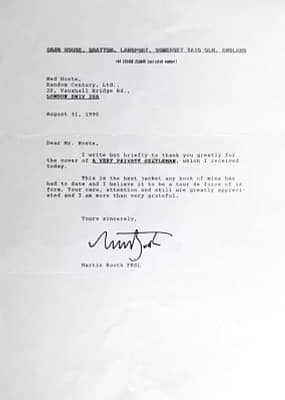 Not long after my adventure in the Hollywood hills,  I was commissioned to design the cover for Martin Booth’s A Very Private Gentleman. The book is about one Signor Farfalla, believed to be a painter by his rural village, in reality, Farfalla is the maker of custom-made assassin’s weaponery. Martin was very clear about his take on the image: an altar-like triptych, as the only person suspicious of Farfalla is the local priest. The panels needed to show a pastoral landscape and butterflies with weapons carved in stone beneath. This cover could have become far too complicated and over-editorial, however, the idea was visualised by a friend of the author who did a brilliant job. I got the artwork when I was briefed but it looked too cold on a flat colour background, so I had the idea of presenting the whole cover, front, spine and back like a painter’s canvas.

The other book I was working on for Century Fiction was A Woman of Style by Colin McDowell. Colin was, and still is, a highly influential fashion/design writer and lecturer. Whenever we met he was charming and immaculately dressed. He was also renowned (at the time) for being the reason Armani was threatening to withdraw their advertising from The Sunday Times; a £50,000 per page hit for the paper at the time. Colin was the paper’s Fashion Editor and had given the Armani show a less than glowing review! For our cover Colin had got an agreement from Vogue to use an image from their picture library and he had requested that I accompany him to make the final selection.

Bright and early one spring morning I met Colin in Hanover Square, London, to go through Vogue’s archive. The trees were in blossom, the London taxis cruising round waiting for passengers and people were hurrying to their offices. Colin greeted me like a long lost friend, “Come on, Ned, let’s go in and have some fun.” To be honest, I did not quite know what he meant, but I soon found out.

As we approached Vogue HQ the doors automatically swung open and Colin swept me into the cool, marble floored lobby to be met by a receptionist that looked like she belonged on the cover of the latest edition. “Good morning, mister McDowell” she greeted Colin in the silkiest of voices and an absolutely dazzling smile, like Miss Moneypenny welcoming James Bond.

“Good morning, how are you? We are expected.”

“Of course Mr McDowell, the archivist is ready for you, please go up”.

We stepped into the lift and the doors silently slid shut. “That just never gets old” Colin said with a rakish smile. When the lift doors opened we were confronted by two archivists, both with a look of slight trepidation on their faces. Colin took immediate control, “Good morning, this is Ned. I would like you to get him anything he wants, he is designing the cover of my book.”

As I digested this unexpected, but highly gratifying introduction from Colin, the pair ushered us into a vast air-conditioned room where every frame of every Vogue photoshoot was stored, along with every fashion illustration ever commissioned since it began in1916. This was going to be amazing.

The room’s enormous moveable archive shelving was opened using big wheels that would not have looked out of place on a cruise liner. This created corridors of shelves that were packed floor to ceiling with folders, each meticulously labelled with: photographer, model, make-up artist, location, date of publication. From Cecil Beaton to Annie Leibowitz, extremely rare sessions of Freda Kahlo and bang up to date with Naomi Campbell. Every great fashion photographer and model were there and Colin and I had free access to it all.

We sat down at the desk that had been set up for us and started to talk about the book and the cover. I was immediately struck by how this highly respected commentator and lecturer in design was talking to me as an equal. My initial imposter syndrome faded quickly as the conversation became more animated and we became immersed in the job at hand.

We put on the required white cotton archivist gloves and started looking at some illustrations from the 1920s as our starting point. These captured the glamour we were after. Painted with an amazing economy of brush strokes, they gave a fantastic fiction feel for the cover but we agreed that the drawings were too specific to the era. So we moved on to early 1960s and started to go though Colin’s favourite photographers and shoots looking for something which was both exotic and intimate.

After four hours of discussion, archivists bring us folders and taking discarded ones away, rolling back shelves revealing different eras or specific photo sessions, we started to feel a bit punch drunk from the sheer quantity of amazing images. Eventually, we arrived at a shortlist of 10 photos. Colin called over the archivists. Bear in mind this was in a pre-digital era, we were actually holding and using the original transparencies, artworks and prints. These were not allowed out of the building for fear of loss. “Many thanks for your help, please can you get these duped to print quality, please ensure the colours remain true, and are sent to my office this afternoon.” Now, t his process in commercial photographic houses usually took 24-48 hours but this was Vogue and this was with Colin, which meant two hours turn around would not be a problem. Colin turned to me, “I want to live with them for a day or so, and then adjust some of the character descriptions, then I’ll send my choices.”

A few days later I got a fax through saying a bike was on its way from Colin. There were now three images in the running, same shoot, same model and I was to make the final choice, as he felt he had been looking at them for too long.

In the short time I spent working with Colin I learned an awful lot, but most of all that it is absolutely possible to be assertive about your work, vision and thinking, while remaining impeccably well mannered. And how charm and humility meant you brought people with you thus avoiding time consuming battles along the way.

A very fine lesson to learn: collaboration is all.

Please note: I didn't always get proof covers for my archive - both of these images have been found via Google and are not as clear and crisp as I would like!