NED HOSTE MAY 18, 2020 BIG IDEAS LIBRARY, HOW TO DESIGN A BOOK AND OTHER STORIES…

Although the impact of this particular story has faded over time, it was, on publication, a highly controversial and political title. Illuminating the "Westland affair" of 1985-86 the book exposed cabinet in-fighting and Thatcher’s autocratic style to public scrutiny. Following hot on the heels of the Miners’ strike and coming just before the “Poll Tax” controversy, this was, arguably, the first of the internal disagreements to reveal the widening fissures in the Conservative party over the UK’s position in Europe. Written by Magnus Linklater the Managing Editor, and David Leigh the Chief Investigative Reporter, at The Observer, the research behind the book came with the highest of investigative credentials.

As with The Right to Know the design had to offer a hard news, current affairs look and, again, it was a quick turn around from brief to print run. For me the cover was made by the photograph. Like all good portraits, it not only showed the person we recognised, but also revealed a sense of growing hauteur and deepening isolation. 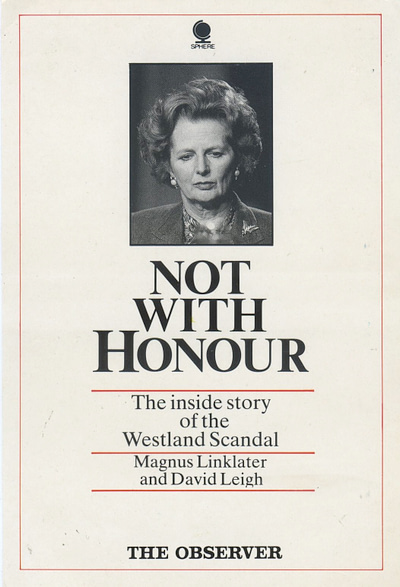 It is always a book designers job to make sure all the elements on the cover work as hard as possible to draw the potential reader in. The first versions I did for this book had the portrait at the bottom of the cover, larger than on the final layout, with the title at the top and it just didn’t feel balanced. I then made the photo smaller, increasing the white space around it to visually heighten the sense of isolation and, by moving the image to the top, a tight lipped Margaret Thatcher appeared to be looking down on the title type, giving the whole arrangement an added degree of tension that just wasn’t there before.

Looking at it now, I could have given a little more space between the type and the red lines to allow a little more breathing space and aid readability, but this tight style was on trend in the 1980s. The first versions also did not feature the larger capital H for honour. I felt, however, that the impact wasn’t quite there, but as soon as I slightly increased the H, the damning quality of the “Not With” was better emphasised.

The photograph originally came from The Observer newspaper, but, sadly, I don’t have a record of the photographer’s name.

The book is still available here.