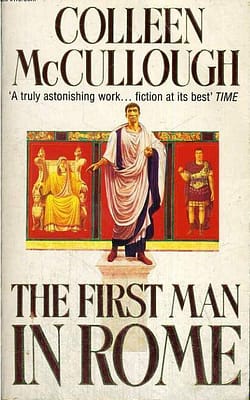 During the late 80s and early 90s Century’s fiction list was attracting plenty of attention following the global success of Colleen McCullough's The Thorn Birds and novella The Ladies of Missalonghi.

Colleen had just completed the first of her Rome series, First Man in Rome, and Century’s Editorial Director Rosie Cheetham (now de Courcy) commissioned me to design the book and set the style for the whole series. Rosie also wanted me to speak to the author. This was not, in itself, unusual, big selling authors usually had the right of approval for their book covers, Colleen, however, lived quietly and very privately on Norfolk Island. A tiny island in the South Pacific Ocean between Australia and New Caledonia, contact, pre the Internet and Zoom, was not without its issues.

Rosie passed me Colleen’s phone number with instructions to call at 8.00am the following morning. It would be 8.00pm for Colleen and the end of her writing day. Rosie also made it clear this was her private line and top secret. The Thorn Birds had sold 30 million copies and, with a hugely successful television adaptation in tow, securing Colleen’s next book series had been a sizeable coup for Century and I was not to mess things up…

Up early, I still remember my the butterflies in my stomach, as I carefully dialled the number. To my surprise the phone was picked after one ring and a soft Australian accent said, “Would that be Ned?” 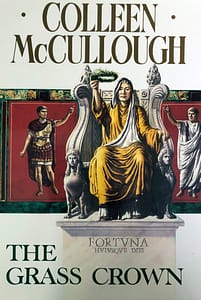 Slightly wrong-footed by this but hugely relieved, I could also hear the evening chorus of a tropical island in the background. Musical birdsong and the buzzing of insects accompanied  Colleen’s delightful laugh when I described my trepidation and that I was calling from a cold flat in south east London.

We discussed thoughts about the cover. In order to encapsulate the main protagonists and give a flavour of time and place, I suggested that we commission an illustrator to paint key characters and story points in the effect of a freshly painted, brightly coloured Pompeian frieze. Colleen loved the idea, so much so that she immediately set about penning character descriptions for the illustrator to fax over later that day. Sometime around midnight my ancient fax spluttered into action and I had what I needed to brief the illustrator. I chose David Farren who, like Colleen, really entered into the spirit of the idea.

The day of Colleen’s call also stands out for another big name author, as, later that morning, I was called into Caroline Upcher’s office to pick up the brief for actor Rupert Everett’s first novel Hello Darling, Are You Working?

Unusually, Rupert had already organised a photo shoot and chosen the transparency he wanted to use. His instructions were that he also wanted the image as large as possible, however, it was clear to me that there was simply not enough space for the type. Plus, the transparency was a different proportion to the cover. This was going to be a challenge.

Rupert was out in Hollywood at the time and, as luck would have it, my partner Alison and I were just about to spend a couple of weeks on holiday with Alison’s sister in LA. No problem then, Caroline suggested I took the roughs with me and meet Rupert, so we could nail down the cover before losing him to his many commitments. This was not a chance to turn down.

I am not entirely sure why, possibly because he was staying at the Richardson’s house, but I had to ring Natasha Richardson, his current co-star at the time on The Comfort of Strangers, to arrange a meeting. Understandably, Natasha sounded more than a little suspicious initially, but when I had explained what I was up to I got a time and the address.

Two days later, on a beautiful sunny December day, Alison and I drove up to a house just off Laurel Canyon Boulevard. As we climbed out of the dense LA smog, the air became clear, the sun came out and the heat began to build. We arrived and parked. Alison stayed in the car admiring the view and, with my roughs and notebook in hand, I walked further up the hill to the house.

Framed by a pure blue sky and bright sunshine, the colours of the immaculately manicured garden looked astonishingly vibrant after LA’s muted tones as I made my way down the hot stone path to the front door. I pulled the bell pull and waited. It was the sort of door that would not have looked out of place on a small castle: dark wood, huge metal hinges and what looked like big metal rivets.

Eventually opened by the housekeeper, complete with Hammer House of Horror theatrical squeak (yes, I couldn’t believe it either), I was ushered through the dark, cool house to the rear garden. Here I was met with more vibrant colours, the bright blue of a rippling swimming pool and an unexpected gathering of people. I was ushered over to where Rupert was reclining on a lounger wearing only a broad smile and a snug white budgie-smugglers. The sort of pool wear that would make diver Tom Daley’s swimming trunks look positively voluminous. Jumping to his feet, he charmingly shook my hand vigorously and offered me a seat.

As I sat and took in the scene around me, I realised I had walked into a manifestation of Rupert’s chosen transparency for the book cover. Sipping on cool lemon drinks, we discussed the cover, supported by a heavy, sultry perfume, only partly supplied, I was pretty sure, by the colourful surrounding flowers.

Rupert was charming company and spent some time explaining that the book was part of his process of coming out. It also quickly became clear that he loved the image so much that he would not agree to any adjustment or cropping to allow for the type. He was also keen that the title was in red, giving the impression that it was written in the lipstick of one of the cover models.

The same transparency has since been used in a number of ways over many editions of the book but, for me, we never achieved a really satisfactory solution. It just goes to show that trying to reverse engineer a cover from a photograph, rather than creating the image as part of the design process, is not helpful. Particularly in a time before Photoshop, which would have allowed extended backgrounds, vignettes and cutouts. But, when one of the biggest stars of the time has cover approval, there is not a great deal you can do.

As the lunch party gradually gathered momentum around us we spent a very amiable time talking about the cover, leaving London and his current life in LA. Not a guest, however, and, in my light shirt and trousers, wearing more than all the other guests combined, after an hour I collected my roughs, including the signed off version, and was politely led out after being effusively thanked for dropping by.

After the bright colourful garden, the heavy scent and heat of the garden, the house felt cool and calm. Once again out in the baking sun I wobbled my way back down the hill and, reaching the car, Alison could not stop laughing at the sight of my ashen face. As we drove back towards LA I recounted the poolside meeting and she continued to laugh until we were back down in the smog of the city. I wasn’t cut out for the weirdness of LA and a week later we headed back to Peckham.