The Horror Obsessed Polymath and Me…

NED HOSTE MAY 2, 2020 BIG IDEAS LIBRARY, HOW TO DESIGN A BOOK AND OTHER STORIES… 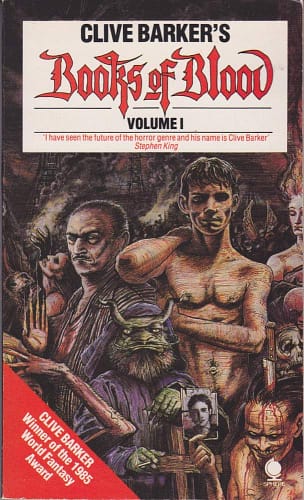 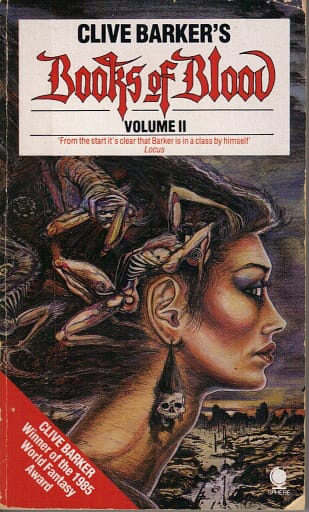 The first really high profile author series style I designed at Sphere Books was Clive Barker’s Books of Blood. Already published in paperback, Clive didn’t like the original designs and convinced his editor that only he could do the cover paintings, as they were his stories and he was best placed to make all the characters come to life. Fair point.

Clive was a very good-looking man and, unlike the visits of many of our other authors, there was always a heightened sense around the building when he came to deliver his paintings. Lizzie, our art director, introduced him to me, explaining that she wanted me to design the series lettering, as she was sure that I could make the lettering complement the gothic quality of his stunning images.

Slightly daunted by this kind introduction, I remember him being really easy to talk to but when it came to his work he was intense and very, very focused. We talked about making the lettering look like blades and spikes, yet also with the ability to reflect an old horror movie style -  without looking too like Mötorhead!

Clive went on to write the immensely popular, Hellraiser and Candyman books, which, under his adaptation and direction, became box office hits as films.

Going on to produce a prodigious and creative body of work over the years, Clive Barker is probably one of the first polymaths I have met; have a look at the full list of his achievements on his wikipedia page and you’ll see what I mean!

This particular Book of Blood series has been re-covered many times since; however, some my versions are still available here.

Next: I'll have a B please Bob…