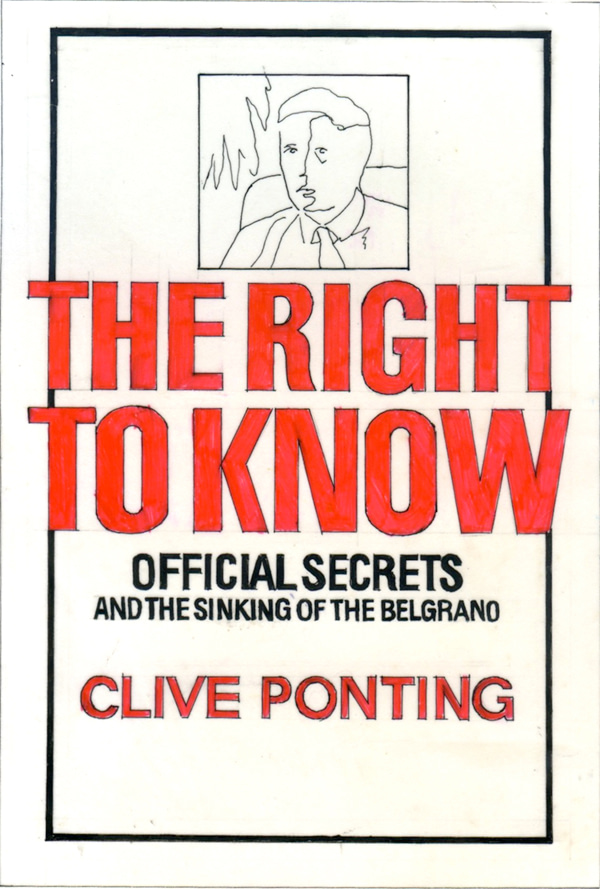 NED HOSTE APRIL 17, 2020 BIG IDEAS LIBRARY, HOW TO DESIGN A BOOK AND OTHER STORIES…

Top secrets and anagrams, design to print in 24 hours.

Clive Ponting was the civil servant who, along with Tam Dalyell MP, was instrumental in revealing Whitehall secrets behind the notorious Belgrano Affair and I was given the job of designing the cover of his exposé.

The General Belgrano was an Argentinian cruiser, sunk on 2nd May 1982, during the Falklands War. Clive’s book would reveal that, when struck by two torpedos from HMS Conqueror, a British hunter-killer Churchill class nuclear-powered submarine, the General Belgrano was, not only outside the combat zone, but also sailing away from it when hit. She sank with all hands, 323 lives were lost. As a result of leaking official papers about the incident, Clive was arrested and tried under the Official Secrets Act. Completely unexpectedly, he was acquitted by the jury. 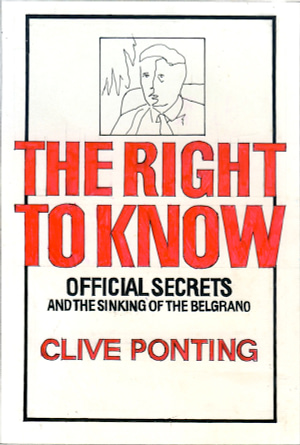 First draft, with made up strapline. Clive’s name was too small and insignificant given the court victory.

The publication of Clive’s book was to be a highly secretive operation, largely because the UK Government was actively trying to suppress it. Often hustled in through Sphere Book’s back entrance (and right past my desk in the design department), I would watch Clive’s slight frame and anxious expression, as, flanked by escorts, he scurried to the planning meetings. This sneaking around was necessary to avoid being seen by journalists at The Times, whose head office entrance was close to Sphere’s on the Gray’s Inn Road in London.

After a couple of weeks of these tense toings and froings, I was called into Lizzie, the  art director’s office. I remember she closed the door. This was odd. Briefs were normally handed out in an open meeting in the main studio. Lizzie gave me a photograph of Clive used by The Observer in one of their earlier exposé articles and the title of a book. Finally, the penny dropped. I was about to play a part in one of the most highly awaited publications of the day.

Highly confidential, the design had to be simple, direct, with a newspaper style. It was also due to go to print in under 24 hours… I don’t think, before or since, I have ever been so focussed!

After my initial work on type and image, the design was approved by Lizzie who

told me to take it straight to Michael Goldsmith, Sphere Book’s Managing Director. Minutes after entering Michael’s plush office on the 5th floor, the design was approved. Oh that all my work had this effect! What then followed was, quite possibly, the weirdest type mark up I have ever done.

All the headline type had to be split across two typesetting orders and the title and author’s name arranged as anagrams, so they would be harder to spot by anyone making it their business to put a spanner in the works. Similarly, all the jacket text was stripped in to lines and put on separate orders, again to try and ensure the content was less likely to be spotted. I was also required to be at my desk very early the next morning to meet the typesetter’s courier and get the artwork completed before the rest of the team got in. Once done I took it to editorial for checking, it was clean and so off it went, straight to production and within the tight deadline.

About a week later the book appeared in the shops, another extraordinarily fast turnaround in those days, and it is still available today here.

In an altogether less fraught timescale, I was also to design Clive’s next book for Sphere, for which he was happily allowed to join meetings by way of our main entrance, but that is another story for another blog!

At the time, I recall recognising Clive Ponting from the TV news, yet Lizzie’s briefing made the project sound more commercially rather than politically sensitive. It was the first book of this type that I had done and it was probably my naiveté and starry-eyed view of being a designer in London, that meant I didn’t think too deeply about the subject matter. It was only some time later that I realised how significant the book was, and possibly still is. 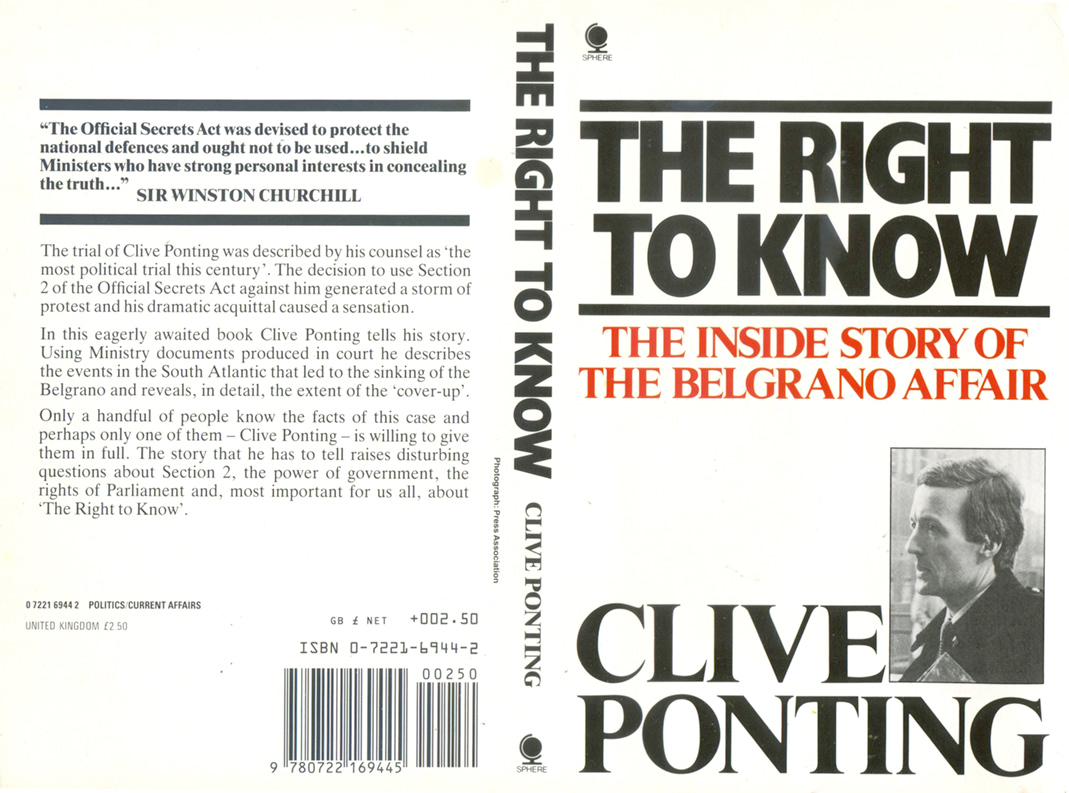 Final flat proof of the final book cover. Clive's name was now much larger as his profile in the press had grown considerably.

As a result of Clive Ponting’s acquittal, the Official Secrets Act was amended by the then Government, to effectively make the definition of “public interest” whatever the Government said it was. I’ll leave you to decide if that was a good idea or not.

Next: A tubercular Irishman in Vladivostok