NED HOSTE MAY 25, 2020 BIG IDEAS LIBRARY, HOW TO DESIGN A BOOK AND OTHER STORIES… 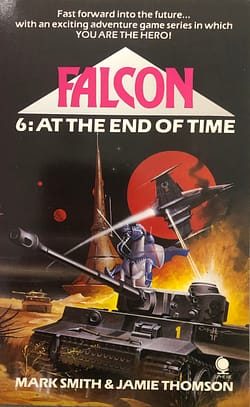 Back in the late 80s the Falcon Game Book Series was highly innovative; the reader was the hero, taking a story path of their own choosing. Today, this is laughably tame and laborious, compared with our easily accessible digital escapism, role playing on our smart phones across time zones and continents. But, remember, this was all before Alan Sugar introduced the Amstrad home computer, complete with its 3.5” floppy discs. Internet for all was in its infancy and Dungeons and Dragons (D&D) was THE ‘gaming’ experience.

The book cover design was to be rolled out across the whole Falcon series and, potentially, promotional T-shirts and merchandise. Closer to a brand identity than a book cover, science fiction-based games, were far from the Tolkein-esque worlds of D&D. My job was to design the Falcon brand that sat above the illustration that Sphere Book’s Art Director, Liz Laczynska, had commissioned.

I purposely hand drew the lettering with very tight kerning (aka space between the letters) to ensure it would be unique; however, the tight spacing proved tricky to balance, as the spaces within the L and O required the C to be distorted. Overall, I wanted to create lettering with a serif you could ‘cut your finger on’ in contrast to the softness of Eras, a popular sans serif font at the time and the typeface I chose for the rest of the cover. 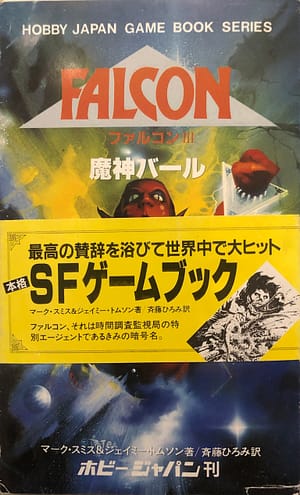 I then used a silver foil triangle as a distinctive unifying element across the series, a strong enough motif to allow colour changes for the word Falcon on each cover, complementing the illustration. It also meant the foil block would be the same on every cover and save the cost of producing a new block being made every time a new book came out.

One book was published per month for six months. A big seller, it was about three months later before I got a copy of the Japanese edition sent to me with the Falcon brand I had designed on the cover. Some of my covers had already appeared on US editions of Sphere books but this felt very exotic and exciting!

The books are still available here.

Next post: Briefing my heroes - don’t ask, don’t get