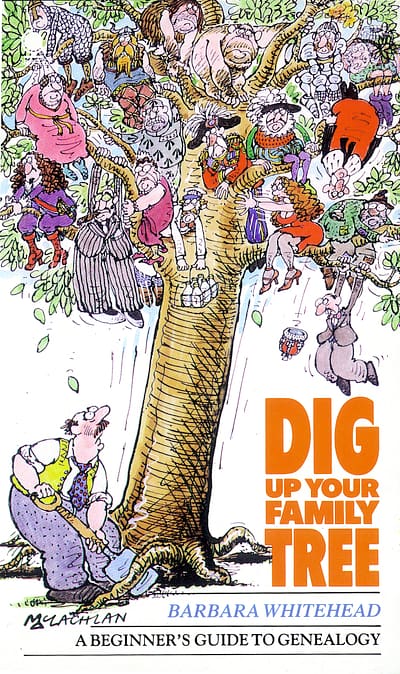 One of the great things about being a designer is collaborating and the joint process of creating a fantastic end result. However, it often requires a degree of self-confidence I haven’t always felt.

This was one of those jobs; as soon as I read the brief I had a crystal clear idea of the image I wanted for the book cover. In Designers that have influenced and inspired me. 1. I mentioned being a huge fan of iconic cartoonist Ed McLachlan’s work. So, when I was given Dig Up Your Family Tree and allowed to commission the illustration, I got the chance to brief and art direct one of my heroes. At 24, this was in equal parts exciting and utterly terrifying.

One relentlessly pressurised element of art direction is, inevitably,  budget versus results. I knew I had a budget. I also knew it would probably be less than Ed’s usual fee. So, how should I brief my hero with enough confidence to ensure he trusted me and would follow the brief, yet not be constrained or restricted creatively, while simultaneously asking him to “do me a discount” without insulting him and producing a really standout end result. Also known as the Art Director’s Conundrum (ADC), the only way was to pick up the phone and ask.

I prepared my thoughts and rehearsed what I wanted to say. This was my first ADC, I’ve still not had my last!

I dialled, and got Ed’s answerphone. My brain went to jelly, I hadn’t expected to leave a message… Lord knows what he made of the message I blurted out, but, thankfully, I did manage to impart my number. I waited.

The day dragged on, I kept working, although I spent more time willing my phone to ring. As the clock clicked round to a quarter to five I had resigned myself to a shaming conversation with my Head of Design, when my phone rang. I was a junior designer, no one called me, my phone was really just a desk ornament. Now it was ringing and it could only be one person. 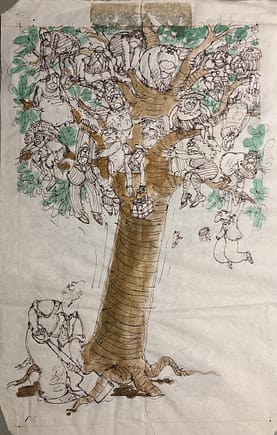 Dig up your family tree initial rough in biro

Ring… I found my notes. Ring… I re-read them. Ring… if I didn’t answer soon there was a risk he would hang up… Ri… “Hello?”
“Hello, Ed here, I think you wanted to commission me, but I am not sure from you message.”
“Oh, thanks for calling back, yes, I would, can I run an idea past you?” I told Ed the title of the book and that I wanted to play with the idea of a man up-rooting a tree with his hapless ancestors tumbled throughout the branches. He laughed and said, “Oh yeah, we can have some fun with that, what’s the budget?”

I had persuaded Lizzie, the Art Director at Sphere Books, to give me a budget of £350. This was £100 more than we would normally commission cartoons I knew it still may not be enough. Ed knew it too, but he liked the idea so much that he offered a compromise, saying, “Well, that is lower than usual but I like the idea. I will fire over my version and we’ll see if it works. If you and your art director likes it, I’ll do it, but if your art director wants to change the idea then I’ll pass.” Given the green light there and then by Lizzie, Ed said, “Great, give me a couple of days and you’ll have a rough”.

Sure enough, the rough arrived in the post. Biro on thin layout paper with a little water colour dabbed in. I loved it, the ancestors were everything from a milkman to a gorilla, a clerk to a caveman. My only concern was that the digger looked more angry than surprised. Liz was happy with the rough and my tweak and I called Ed back. Happy to make the change he said I would have the artwork by the end of the week.

When an illustration is very strong, some covers almost design themselves, this was one of those.

It sailed though the approval procedure and went off to print. The artwork came back from scanning and normally would be returned to the artist. But, this was my first art direction project with a big name. I rang Ed and asked if I could buy the artwork. He laughed, “You know I normally sell my colour work from £600, I suppose you are going to try and negotiate me down again? Tell you what, it’s been a nice one to do, £200 and it’s yours”. That was over half my month’s pay cheque but I was delighted.
“Yes please, that would be great!”


Today, Ed’s original framed art work remains on my studio wall alongside his biro rough and another of his originals from Punch. It always serves to remind me that it never hurts to ask.