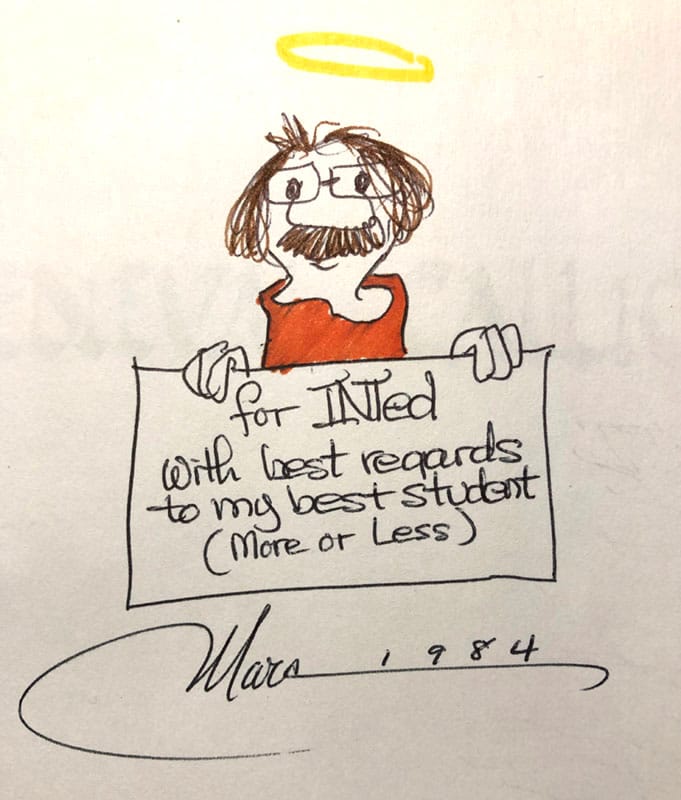 NED HOSTE APRIL 6, 2020 BIG IDEAS LIBRARY, HOW TO DESIGN A BOOK AND OTHER STORIES…

Designers that have influenced and inspired me. 1.

My design degree, from Exeter College of Art and Design, was focussed on typography and lettering design, and, during my studies, I was lucky enough to be taught by some extraordinary and influential lettering designers and calligraphers.

David Harris: Letraset and Linotype. A hugely kind and avuncular individual, David had the most amazing hand skills. The highest profile design tutor on the course. One of David’s early jobs was in the days before printed cinema posters, he hand-painted the promotional posters which listed the films to be shown for the week, these were then put into A-board displays in the street to entice the cinema-goers into the showings. This along with his years experience in lettering and design had given him immense hand skills. I would sweat a morning trying to get a letter shape right, David would pick up a brush and just paint it in a single stroke. Berthold Wolpe : Font design and calligraphy. A prolific German designer, Berthold had lived through the second World War, some of which had been spent in a British internment camp because of his German origin. He had studied under Rudolph Koch, another prolific type designer and calligrapher, and was the designer of the Albertus typeface for the Monotype Corporation. I vividly remember him explaining to us, in his gentle German accent, as he picked a tiny pencil stub from his jacket pocket, “It was a pencil like this that I designed the first draft of Albertus while in internment during the war. I had a tiny notebook I had smuggled in with me, and I drew the whole thing out to keep my hand in”. I could completely understand his need, design is an itch that just needs scratching, otherwise life becomes unbearable.

Michael Harvey: Architectural letter designer and letter carver. A tall man, with an impressive beard and seemingly inexhaustible line in Guernsey pullovers, Michael taught me letter carving and guilding. There is something wonderful about seeing letters emerge from stone or wood at the end of your chisel that offers a real understanding of how those letter shapes have evolved. Then, there is the equal frustration and spectacular transformation of guilding your carving with gold leaf (unless you have any kind of guilding skill, gold leaf is a horribly thin and anarchic material that usually does what the hell it likes). Apart from being one of the foremost letter cutters in the UK, Michael also was an author and wrote many books on calligraphy. You can find many examples of his work on buildings all over the UK.

Marc Drogin: Calligraphy.  Marc is one of the  world’s truly eccentric individuals and an exponent of teaching mediaeval calligraphy to the strains of Dixyland Jazz to get the vertical strokes even (which, by the way, really does work). I think of him as a mediaeval monk born out of his time. He used to spend six months of the year designing business cards for dentists in the US and this, apparently lucrative undertaking, funded his travel and research for the other six. Marc also had a cunning way of getting free pizzas. He would pay by cheque and fill them in, in his lavish illuminated calligraphy (complete with gold leaf). The restaurants never cashed them, but inevitably framed and hung them on their walls.

During my studies and since, I have also been heavily influenced by other designers and design movements here are just a few:

Richard Kindersley is one of the most influential architectural lettering practitioners in the UK. A good example of his work, and a favourite of mine, you’ll find at The British Library on Euston Road in London. Richard’s style is quite distinctive but it is the size and use of the lettering to disrupt the surface he is working on that I find really inspiring. His work can also be seen on inscriptions, standing stones and other sculptural work. Some key pieces include work on Tower Bridge, the M25 Bridge, St. Paul’s Cathedral, Westminster Abbey, V&A Museum, Keele University and many more around the UK and abroad.

Russian Revolution Typography For me this era of typography is hugely influential using the graphic form of the letters to deconstruct the words and yet make them appear readable - you can also see the influence in the work of Neville Brody. It is rare that you get to be this radical with book cover typography but it is worth giving it a go.

Neville Brody is an alumnus of the London College of Communication and Hornsey College of Art, and is known for his work on The Face magazine (1981–1986), Arena magazine (1987–1990), as well as designing record covers for artists including, Clock DVA, Cabaret Voltaire, The Bongos, and Depeche Mode. Heavily influenced by the Russian Revolution era typography, Neville managed to further deconstruct it and I think his time at The Face fundamentally changed contemporary magazine design. It certainly reframed how typography could be used to enhance the visual appearance of a page, rather than just making the text readable.

Ed McLachlan has been an influence since way before my first professional commission on Challenge magazine. His cartoons and illustrations have graced the pages of Punch, Private Eye, The Spectator, The Oldie, Saga and a host of newspapers, magazines, books, greetings cards, calendars and films. During my time at Sphere, I was lucky enough to commission Ed for a book called Dig Up Your Family Tree and I will be telling you the stories about that particular cover later on in this series. Getting to commission a personal hero was a real privilege and total pleasure!

My influences don’t, of course, all come from the world of calligraphy and I’ve been moved and inspired by other professionals and artists outside graphic design, including music. More of that later…

The music to help you make mediaeval calligraphy even – really, it was what the monks used!

Next time: What kind of feedback is Tutti Frutti?