Lettering design and 15 words of genius…

NED HOSTE APRIL 25, 2020 BIG IDEAS LIBRARY, HOW TO DESIGN A BOOK AND OTHER STORIES…

Lettering design and 15 words of genius… 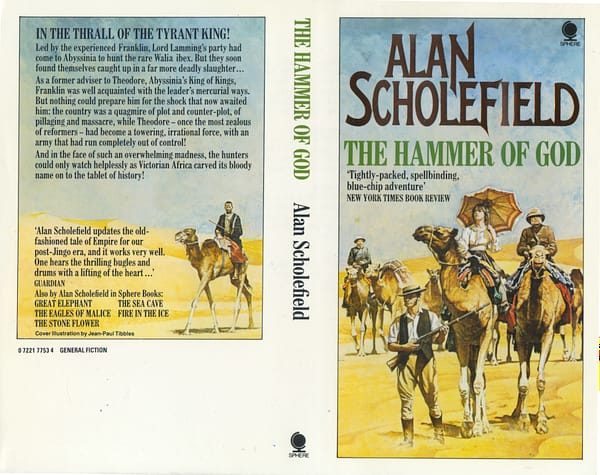 Some authors are so popular, that they get their own series style. Alan Scholefield was one. With writing skills to master a range of genres, at Sphere Books we focussed on Alan’s ‘epic adventures’.

The lettering style for Alan’s epics was the first ‘author style’ I designed and drew up myself at Sphere, rather than commissioning one of the lettering artworkers we used. I was inspired by the Albertus font, however, because the name Scholefield is so long, I had to adjust the proportions and embolden the serifs, so it would work at a size that could be seen across a book store and attract his many readers.

In today’s digital design world, lettering of this kind would be a swift operation, but hand painting at treble the size and then printing it for the artwork took a considerable time, which was the only way bespoke lettering was prepared for print in the 80s and well into the 90s. The cover for Fire in the Ice is an early, hand-trimmed proof, which needed approvals from the sales and editorial teams, below are the hand written comments…

BB was fiction director, Barbara Boote, and AS was Ann Suster the senior editor. I later worked with Ann again when she was at Century Fiction.

When designing one of these huge epics, there was no time to read the whole book, many weren’t even finished when we began designing, and some were still only in draft. This is the reason, some perplexed readers will undoubtedly have noticed, that in those days the characters on the cover did not always bear much resemblance to characters in the final books! We had to work so far in advance to get sales to the big stores like WH Smiths that we had to design the covers before the author had committed to their final full stop. 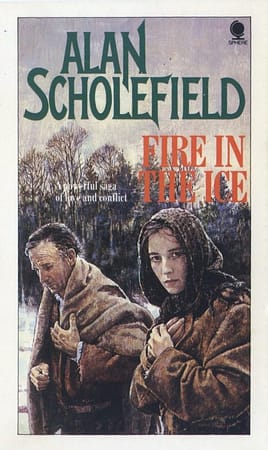 We did, however, have a secret weapon: our story summarisers who broke down the books into key story and character descriptions. One such breakdown for Fire in the Ice is still my favourite and, astonishingly, accounted for about a quarter of the book. The summariser, I remember as a tall, dashing figure, swathed in tweed twin set with big purposeful brogues, helpfully fed back in one vaguely damning sentence: “They travelled together across Russia until they reached Vladivostok, where they met a tubercular Irishman.” 15 words of genius accounting for some 250 pages and a suitable launch pad for the design.

I remember I was keen to use foil on this cover, actually, I wanted to use two foils and emboss the lettering to make it stand forward from the painting. These days with photoshop there are so many more tools at a designer’s fingertips. Unfortunately, there was not sufficient budget for my plans, so, the title and author type was specified as just green and red, and the title in no ways stands out as I wanted.

The artist who painted many of Sphere’s epic illustrations was Jean-Paul Tibbles. An accomplished artist, today, Jean-Paul specialises in portraits with work hung in the National Portrait Gallery. The paintings for the book covers were created in acrylics at about double size of the book and amazingly detailed for their size.

My lettering for this series style was used on all Alan’s books until the Penguin takeover of Sphere was completed in the Spring of 1986, and the remaining staff moved to Wright’s Lane in west London. Ten years’ later I designed, Night Child, in hardback, for Chapmans Books.

Next time: A polymath, a painter and a horror filmmaker…