Me? Illustrate a cover?…

NED HOSTE JUNE 8, 2020 BIG IDEAS LIBRARY, HOW TO DESIGN A BOOK AND OTHER STORIES…

During my time at Sphere Books I designed a series by Peter Tinniswood, which afforded me the opportunity, not only to design, but also draw all the cover images. An unlooked for, but hugely rewarding moment! 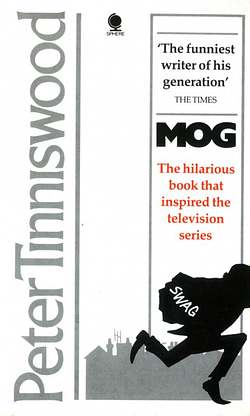 Cover design and illustration for Mog by Peter Tinniswood

Peter was a well known television writer whose shows attracted prime time slots with top comedy actors and he was a really big deal for Sphere. He was high profile, always highly anticipated and dauntingly prolific.

The first two covers were from Peter’s Brandon Series. These were Mog, written in 1970 and its follow up, Call it a Canary.

The books were destined to tie in with the ITV television series written by Dick Clemens and Ian Le Frenais. Again fabulous writers, Clemens and Le Frenais were know for Whatever Happened to the Likely Lads and Porridge in the UK.

I loved both books, yet, for me, the television adaptation of Mog (Call it Canary was not televised) lost much of the charm of Peter’s writing. The books came alive far more in the imagination; Peter’s wonderful character descriptions allowing space for the reader to create their own visuals. Not unlike Peter’s long running radio show Uncle Mort, from the same Brandon family.

I was allocated the cover for Mog in one of our regular Monday meetings and had been playing around with some ideas, quickly sketching out a placeholder image: Mog, the small time thief, tip-toeing out of frame carrying a sack of ill-gotten gains in front of a row of terraced houses to represent Peter’s Manchester roots. 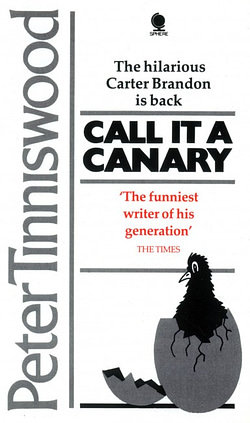 The roughs went through the usual inspection process and I was looking for potential illustrators to realise the rough I had created. The feedback duly came from doing the rounds of editors, sales, and, in this case, Peter Tinniswood himself. Around this time not all authors had cover approval unless they were big names, Peter was.

My boss, Lizzie, called me into her office, and casually announced that she wanted to commission me for the illustration. I was utterly flabbergasted, the sketch had been very rough but, apparently, Peter loved it and the cover treatment as well. He just wanted to run with it as it was, but, “just tidied up a bit.” I left Lizzie’s office at least two foot taller.

A few months later we were to publish his next book, Call it a Canary, the message came through that Peter wanted the same designer to work on the new cover and illustrate it. This was the first time an author had officially recommissioned me. More inches were added to my height.

These two covers opened up other opportunities for me as Sphere’s in-house cartoonist, along with designing our typesetter Spectrum’s Christmas Card, Sphere Christmas Card, Booksellers Association exhibition and Frankfurt Bookfair stands in 1985 and Squirrel runs up Joggers Shorts in Search of Nuts, some of which you’ll learn more about in future blogs!

Next post: Danielle Steel, how to recover an entire series