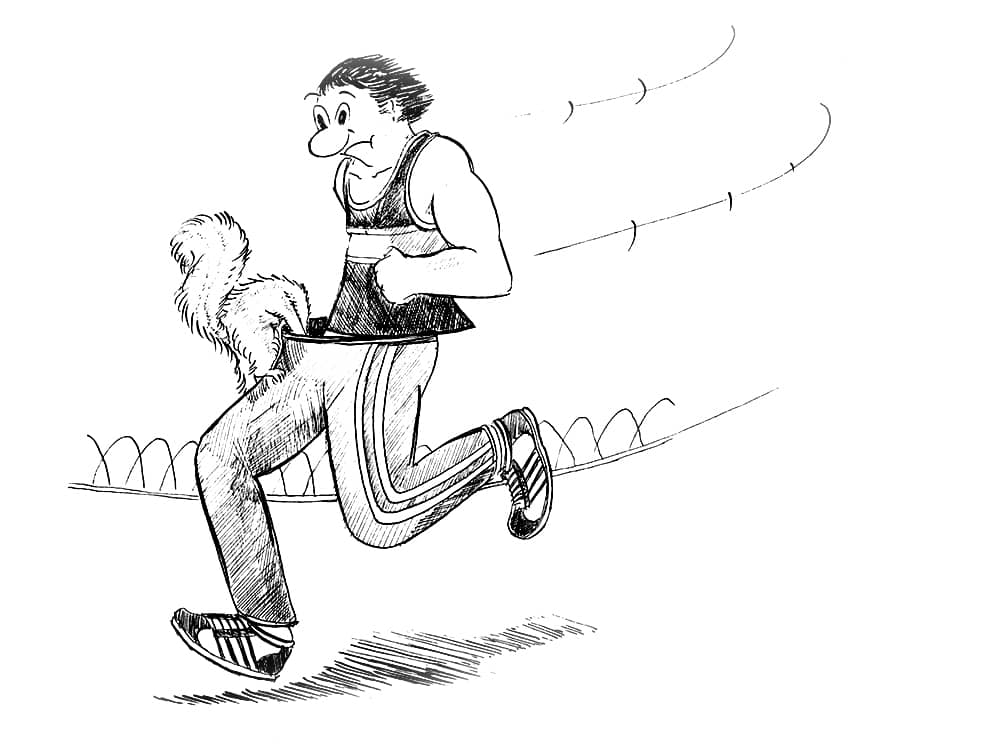 Anarchy and Invention: cartoons, exhibitions and a fine dinner out 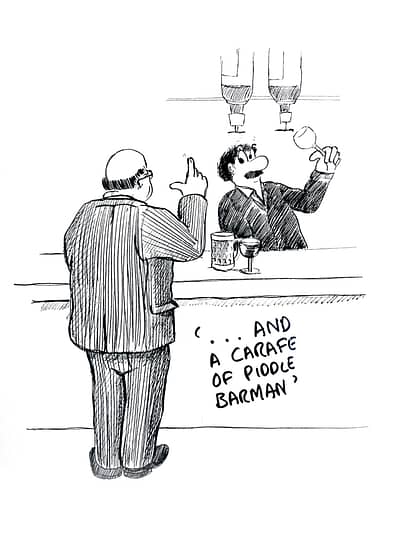 From a tender age I have loved cartoons. From Top Cat to The Flintstones, Roobarb and Custard to Asterix, I loved the anarchy and the invention. I have already written about my work with Ed McClachlan and, during my time at Sphere Books I went on to draw a number of cartoons for covers and company Christmas cards for Sphere and some of our suppliers. One morning I got a message to see Barbara Boote, Sphere’s Head of Editorial; with no idea what was in the wind, off I trod…


A slightly built, small woman with an enviable collection of cardigans, Barbara had a great sense of humour and enjoyed the funny side of most things. She had just bought a book of happy news stories collated by Margaret Caton Jones, which delighted in the title: Squirrel Runs up Joggers Pants in Search of Nuts, I guess it set the tone. 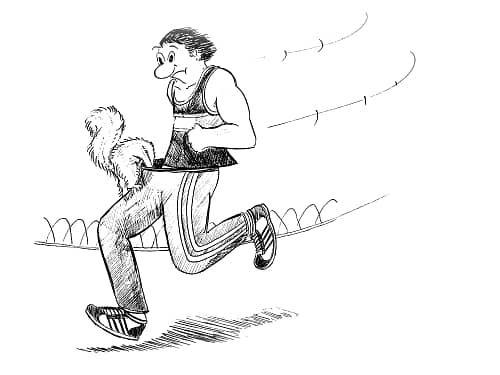 Barbara asked me if I would do a cartoon for the cover, I relished any opportunity to draw cartoons and to get a cover commission was always exciting. But that wasn’t all, “I don’t want you to just do the drawing Ned, I want you to do the whole cover.”

Barbara could tell I was excited, but the best was yet to come, “And could you also draw 12 cartoons to go through the book?” I couldn’t believe it… Barbara went on, “of course, you’ll get paid, here’s the manuscript, choose the ones you want to do.” What a joy!

It is still available here

Woman cleans out budgie cage and budgie with vacuum

Later that year, an interesting spin off from the popularity of this book was my commission to design Sphere’s sales stand for that year’s Bookseller Association Exhibition in Brighton and adapting that design for my first Frankfurt Book Fair, a key event in any publisher’s calendar and one of the world’s largest book fairs.

The commission for the exhibition stand came from Sphere’s Sales Director, Dag Smith. With a name any Bond villain would have enjoyed, tall and gaunt, Dag chain-smoked his way through life; at times his office was so full of smoke you’d be hard pressed to see if he was in there at all.

From breaking down en route to Brighton, to having to convince the organisers to let me in and set up after everyone else had finished, the job went well. I had complete creative control and had designed big bold playing cards. It was all a colourful, confident statement, which I now suspect was to bolster Sphere’s value prior to the company sale.

Frankfurt was another exercise in a display of company confidence and I designed huge versions of my cartoon characters. The stand was shipped out to the exhibition venue, and, early on the day of installation, I flew out from Heathrow to join it.

At the time I remember thinking it was a bit odd that the rest of the sales team were nowhere to be seen, but I was so intent on getting to the venue in time, excited about the journey and generally terrified that the exhibition stand would not be there on my arrival, I put it to the back of my mind.

Now, I thought exhibition halls in the UK were big - well, these were vast. There were (I think) five halls each with four levels and each level was SO huge the main contractors rode around on small motor scooters because it took so long to walk from one side to the other.

Clutching the hall, level and stand number, I trudged for what seemed like miles past a sea of partially built stand shells and eventually found the Sphere space. Thankfully, there were the sales team and, more importantly, all the stand packages. By now it was nearing the end of the working day and a bell announced the time to leave. I just had time to check all the parcels before heading off to check into my hotel.

Back in the 80s, what is less well known about the Frankfurt Book Fair was that the exhibition hall was right on the edge of the red light district. Most of the hotels housing the world’s publishing elite were also found in the same district.

Slightly frustrated that I had taken Latin not German at school, I got to my hotel pretty sure the German women’s conversations I was frequently invited to join on my walk, would not have been covered by the O’level curriculum.

Once in the foyer I fell into conversation with two of Sphere’s overseas sales team. Trevor and Julian. Julian was one of the gentlest of men I have ever met. Previously a trainee vicar, at the start of the previous Frankfurt Book Fair he had his momentarily unattended suitcase, with all his clothes and papers for the week blown up on the airport runway by German security. Trevor, another charming man, was the Export Sales Director. Trevor gently enquired as to why I hadn’t been travelling with the rest of the sales team. After comparing notes it turned out that I had been booked economy while everyone else had flown BA business class. He was furious.

“OK” Trevor said, “You are coming out for dinner with Julian and me in the old town tonight and you are to use your entire duty free allowance on the way back and I will sign it off as expenses.”

It was a delightful meal with great company that I’ll never forget, including running the gauntlet of the local business women once again on our return to our rooms. The next day the show went up in about three hours and then I was off to get on the plane home, laden with brandy, chocolates, perfume and wine all care of Trevor.

Two weeks later it was announced that Sphere was to be taken over by Penguin and we were all to be offered redundancy. My partner and I had just bought our first flat and suddenly the future seemed less certain. Trevor took the opportunity to open his own bookshop. He genuinely loved books and I hope it made him happy selling to readers rather than distributors. The times and the publishing world were changing and all of us at Sphere would have to move on too.