The Reindeer of Death

tel: +44 1904 270962‬
email: info@thebigideascollective.com
The announcement that Penguin Books were to take over Sphere, my first professional home, arrived hard on the heels of the euphoria of my first Frankfurt Book Fair. The chaff from the rumour mill finally drifted down to the ground floor design department revealing that our death knell had been, of all things, Christmas. 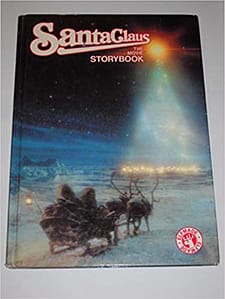 Oh my, they are still available. This was one of the few that didn't get returned.

Sphere had gone “all in” on a tie-in with Santa Claus the Movie, tipped to be a box office smash. Twenty plus books, all Christmas lead titles, from children’s colouring books to novelisations and ‘making-of’ books, we had been working on them since June to be ready for the Christmas launch in September.

Deadlines met and books shipped out to the shops, it was around then that stories began appearing in the press that the film had, unfortunately, claimed the life of a key cast member. One of the reindeers had died.

With books in the shops on a sale-or-return basis, by the end of October the returns were hitting 90+%. Christmas, for us at least, was cancelled. A small publisher with some highly desirable authors and titles, and a gapping hole in their finances meant only one thing. Penguin Books swooped (do Penguins swoop?) and the deal was done.

By mid-November our offices on Greys Inn Road was to be on the market on completion of the sale and Sphere’s new home was to be a floor of Penguin’s new building at 27 Wright’s Lane in west London. Penguin didn’t need us and we were all offered voluntary redundancy. This was both good and bad news. Good news to get some cash; bad news because to get it we had to work until the following April to qualify. This was compounded by the fact that the Sphere design team would be working on titles that, even if published, would probably not retain our designs. Only six of over 60+ staff eventually made the move.

I remember that time for weekly leaving parties and our department’s side industry in designing leaving cards; however, there were still book launches to go to and publicity campaigns to create, including the highly memorable The Young Ones book. The Young Ones, along with Roland Rivron and his band Raw Sex in attendance at the Groucho Club. That stands out as being wilder than most. As the work diminished the number of lunches increased, it was a tough time!

That year I was asked to do the Christmas card for Sphere. Going through a sketchbook the other day I came across my original very rough roughs of some ideas. You can also see Lizzie's feedback notes in red on some of these. The It won't be turkey this Christmas drawing was universally well received by all the staff. But the board rejected as it may offend Penguin. Look what we got for Christmas was the rather more tame choice. 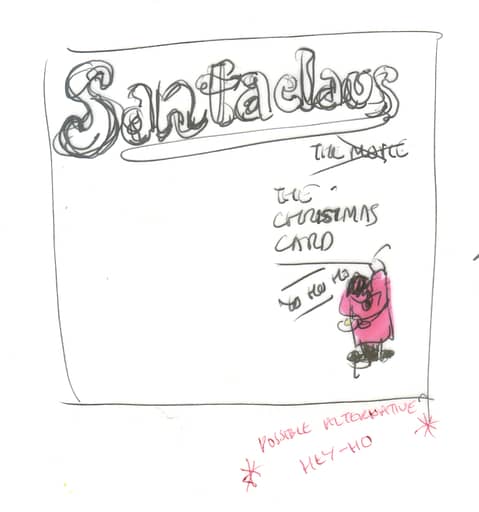 Early in February, my Art Director Lizzie called me into her office and kindly offered to help to get me another job and one of the options was to go with her as a Senior Designer to Transworld Books. Senior designer, I thought this was quite funny. I had only been at Sphere 18 months as a junior! Lizzie reminded me that I had blagged that job without the required three years experience, so now I ‘officially’ had four and a half years! I got invited to an interview with Transworld’s Head of HR and after a long and gruelling interview I was offered the job.

Meanwhile, unknown to me, Lizzie was also talking to a publishing design agency in Fulham that worked with most of the major UK publishers, Slatter-Anderson. Robin Anderson, one of the partners, visited Sphere regularly so I knew him and, what appeared to be out of the blue, I got a call from Robin to visit their riverside studios on the banks of the Thames.

A diminutive, gently spoken Scot with large green framed glasses and an impressive collection of Benetton pullovers, Robin always gave me the impression that he was living very much on his nerves. I had not met Derek Slatter, his business partner, until my interview. Derek was the ying to Robin’s yang; a big man, with a considerably less designer look, a love of music, cars, socialising and photography, a great raconteur, Derek ran the studio, while Robin took on the clients. We all chatted for about an hour and the next day I had my second job offer as a Senior Designer.

Now I was torn.

Pragmatic and kind as ever Lizzie said, “While I would love you to be working with me. We both know what the best move would be for you. You need to be challenged and working in-house at another publisher would just be too safe. Oh yeah, and you know I set up the interview for you? So don’t mess it up.”

Every young designer needs a Lizzie in their life. My debt to her is enormous.

On a sunny Friday in early April, after yet another leaving lunch in a small restaurant just north of Smithfield market I left Sphere Books. I started at Slatter-Anderson on the following Monday and a whole new way of designing and project managing began; designing simultaneously for multiple publishers, publicity campaigns, cosmetics companies, high fashion designers. This was going to be a huge step up and forward!

Next post - The cast of the Slatter-Anderson soap opera.