Three Breaks, None of Them Bones

NED HOSTE MARCH 13, 2020 BIG IDEAS LIBRARY, HOW TO DESIGN A BOOK AND OTHER STORIES…

The Interview | July and September 1984

In every career there comes those break-through moments; for me there were three in as many months - 1984 was an amazing year! 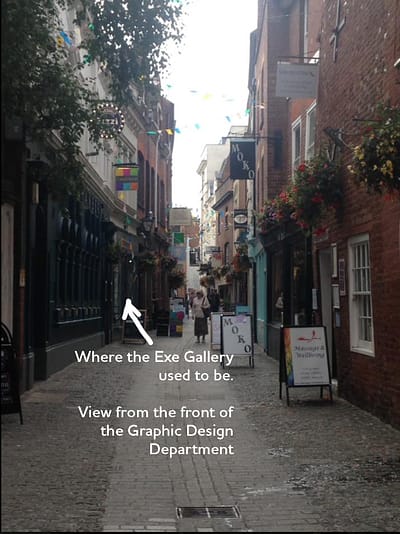 In July of that year I received my degree in Graphic Design and Typography from Exeter College of Art and Design. Secondly, my external examination assessor, Brian Sanders, liked my final degree show.

Back then Brian was a high profile watercolour illustrator for book publishing and advertising and, despite the fact that my show was all lettering and technical typography, Brian sent a message to arrange a chat to talk through my show. We sat down on a couple of wooden chairs in front of my section of the degree exhibition in the Exe Gallery. I remember Brian as a man of slight build, a check shirt and a real intensity when we spoke about design and creativity, and, after thirty minutes or so, his last question was: “What are you doing after college?” I already knew where I wanted to be…

“Moving back up to London to look for design jobs.” I replied.

“Well, come to my studio and you can go through my address book and I’ll help you find some good people to contact…. Oh, yeah” he added, as we stood to leave,  “you’ll be all right.” It was a throw away line that I almost missed in my relief at finishing the degree interview. But break number two was in the bag.

We arranged a time in August and, as promised, I found myself sitting in Brian’s beautiful top floor Covent Garden studio. The studio had a big window framing a spectacular view over London and Brian and his partner each had large drawing board on which to work, the floor to ceiling bookshelves created their reference library. I read out names from his address book while he was working and I would get a “Yes” or “No” at each name. In the ‘L’s  we got to one that I found tricky to pronounce.
“Ah yes, Lizzie,” he said, “she is wonderful, make sure you write that name down”. Lizzie Laczynska was the Art Director at Sphere Books.

The third break-through came about three weeks later while I was travelling to a freelance job in Hampstead. I was booked through a freelancing agency to do camera-ready artwork corrections on a Spanish Tool catalogue for Bosch. I didn’t speak Spanish and the type was tiny 8pt. It was incredibly laborious, I was  stripping in individual letters into the text to ensure they aligned, some of the smallest letters and accents were well under 1mm wide…. I did the weirdest jobs in those first few months. One I won’t forget was a spell at Kall Kwik print store on the Walworth Road in the south east of London, just round the corner  from the flat we got after college.

There was one particular customer, whose arrival saw the manager immediately put out the closed sign and it was understood that I dropped whatever I was doing to attend to what this man wanted, which were usually invitations. It always perplexed me why this one customer held so many parties and had such an effect on the manager. I never got round to asking. The man was not hugely memorable but I do remember the two huge guys, usually in suits, who always accompanied him and spent their time looking around the shop and out into the street. A few years later I did recognise our valued customer on the local news. It turned out he was one of the most notorious gang leaders in South London and had been arrested for running extortion rackets. That did leave me wondering which poor souls those ‘invites’ were destined for.

But, back to my third break. I was riding the tube to Hampstead and scanning the Guardian Creative jobs section when I spied an advert for a Junior Designer post at Sphere Books: three years experience needed. Now, on paper, fresh out of college, how could I show three years’ experience? Well, if I didn’t apply, I would never know if you don’t ask…, so, I sent my letter and CV off. A week later I got an interview date. I couldn’t believe it.

A week later and I was waiting nervously in the foyer of Sphere’s head office on Gray’s Inn Road and that was when I met Lizzie Laczynska. Informally dressed in jeans and a stripy jumper (her trademark wardrobe), she bounced out of the door that led to the design studio behind the reception desk and said,

“You’re the graduate who had the balls to apply for a job which needs three years experience, well, I just had to interview you!” I followed her into her office which was heady with the smell of cigarettes, an integral part of her briefing process, and started talking.

Lizzie had a great sense of humour and we got on well. Sphere was her first art director position, a few years later Lizzie after Penguin took over Sphere she became art director at Transworld Books Group, which at the time was one of the big art director positions in UK publishing. After a half an hour interview I left hoping I had got the job. About a week later I got the call…

“OK, Ned you’ve got the job, I am going to throw everything at you for six months and, if you cope, I will keep you on, if you don’t you’ll only have two and a half years to work before you have three years experience”.

Over the next 18 months Lizzie kept her word and threw pretty much everything at me; I designed exhibition stands, (even installed one at Frankfurt Book Fair) styled sales conferences, illustrated books, designed publicity campaigns, designed and drew up lettering, commission artists, designed many book covers and went to many launch parties - it was the 80s after all.

That was the start of my full-time professional career and I will always be grateful for the trust Lizzie showed in me in. She was an extraordinary professional and had a way of making her department, just four designers and an administrator, feel like a world-class team and I loved to part of it.

The soundtrack to putting up my degree show.