Working with Ann Suster and Tony Whittome, my name soon got passed round to other editors in the Hutchinson and Century fiction departments. Eventually, I started working with one of Century Books’ co-founders Rosie De Courcy, who also handled some of the big name non-fiction titles. Quietly spoken, immaculately well dressed and precise in her choice of words, Rosie was very influential in 1980s and 90s publishing. More importantly, she was a lovely person to work with and made you feel like you were part of the most important meeting of her day.

One of our very first collaborations was for an American business tycoon who was, at the time, virtually unknown in the UK (and certainly to me), despite the book making the top 10 of the New York Times Bestsellers list.  I was given a transparency of the businessman with a backdrop of Central Park and a highly restrictive brief from the author’s lawyer no less. The author’s surname had to be the biggest type on the cover, plus the full title and author name had to be in gold foil, unheard of on a hardback at the time because of the production cost. The font also had to match the typeface of the tycoon’s corporation. There was also an incredibly tight approval schedule with everything being couriered to New York for approval by both lawyer and author, again unprecedented at the time. This was pre-email/file transfer and couriering to the US via Fedex was time consuming and costly. Century Hutchinson, however, were banking in this being a big UK seller and were happy to loosen their purse strings.  The title had been promised as a super lead title and was fast-tracked to publish towards the end of 1989. 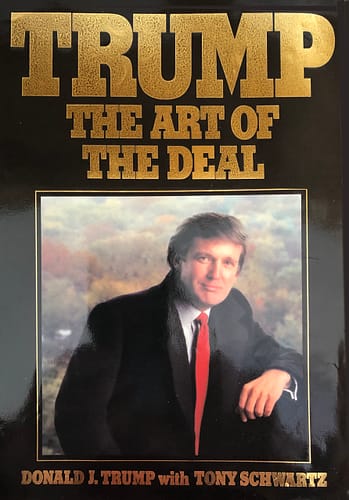 I knew that the cover would be assessed not in visual terms but a line-by-line assessment of compliance to the brief. I had done a number of film tie in covers where the cast lists were always highly prescriptive to be sure the starts names were bigger than the co-stars and then the director bigger than director of photography. But this was the entire cover and I was very aware the Century was relying on me to comply with the restrictions, over creating a cover more suited to the UK market.

I had pretty much forgotten I was responsible for the UK edition until the 2016 US Presidential Election campaign. The book’s co-author Tony Schwartz popped up in the news claiming his ‘co-author’ had, in fact, not written a word and that the book should be re-categorised as fiction rather than a business book, Published in the UK  late 1989 the book was The Art of the Deal by the future 45th US President, Donald Trump.

In stark contrast to The Art of the Deal, I was introduced to a new editor Caroline Upcher. Great fun to work with, Caroline would also go on to become the ghost writer on Naomi Campbell’s controversial Swan and then an author in her own name.  She commissioned a lot of new titles, more of which in future blogs and I enjoyed working with her, as it always felt like a true collaborative process: coming up with creative ideas, choosing the cover artist or photographer and creating the complete look for a cover.

Our first collaboration, to my delight, was a book for Hollywood legend Kirk Douglas.  It was Kirk’s first novel and he wanted a different look for the UK edition. I took on the brief and was informed that the author and, of course his US agent, wanted to be very ‘hands on’. After The Art of the Deal I was wary of this approach, but my experience couldn’t have been more different.

Five days after sending in my first design roughs and far too early in the morning to be exciting, my fax machine was pinging away to announce activity  and then started disgorging pages. Bleary and more than a little grumpy, I got up to see what was up. 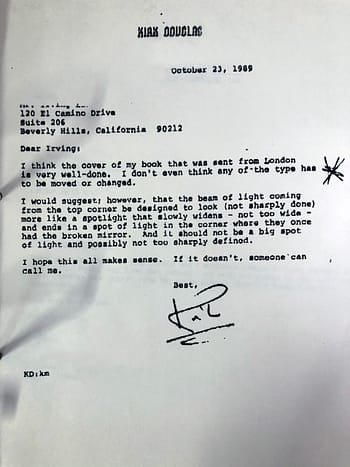 “From the desk of Kirk Douglas at the Beverley Hills Hotel…” I was suddenly very awake.

What followed was feedback from the man himself. I must admit, I did enjoy the fact that he’d be completely unaware of the destination of his fax. Fired out from his luxurious hotel at the junction of Rodeo Drive and Willshire Boulevard in Los Angeles, to my small two-bedroom flat in a Victorian Terrace in Peckham, south east London.

I made the minor alterations Kirk requested and we moved on to the preparation of finished lettering and print ready image. The cover copy was then set up to print.

About six months later he was in London for the launch of the UK edition of Dance with the Devil and, while I did not meet him in person, he took the time to send me a personal note within a signed book to thank me for my work and left it with Caroline to pass on. The bigger the star the nicer they are! My general cover idea is still being used on current editions of the book some 30 years later.