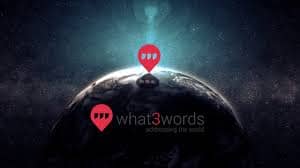 Recently I came across a great new tool: what3words. It's a way for anyone, anywhere in the world to be found if they have the three words that describe the 3 x 3 metres square they inhabit.

That's anywhere in the world.

An astonishing 57 trillion, 3x3 metre squared areas have been mapped and named. You'll find me regularly at export.peanut.wire.  It is estimated that 75% of our world has complicated or obscure addressing and this easy to remember and translatable idea may well offer the answer. As you can imagine this simple approach overcomes different global addressing systems and cross-border alpha-numerical mix ups. The clever algorithm that drives the tool is less than 10MB and is therefore light enough to host on pretty much everyone's smartphone and it works on all platforms.

what3words has been co-founded by Chris Sheldrick who, after 10 years in the music business constantly frustrated by lost bands, suppliers and 'hidden' venues, joined with translation expert and quiz lover Jack Waley-Cohen to create a better way to find things.

A beautifully simple way to approach and solve a complex problem.

It also reminded me of how I often start a conversation with the people I work with around their businesses. Before we look at what they offer, sell and promote I always want to get to the bottom of what makes them tick; without them there wouldn't be a business, so, as a copywriter who's going to write for them I need to know them. I ask, "Give me three words that describe you." It takes a while. I usually get three words that describe their business, their job title - often words they think I might want to hear. We keep going because the three words that really describe them will come out eventually and that's our starting point. The words are sometimes surprising, even to the client but it's simple and it works.

Find your three word space and more about the people who are addressing the world at what3words.com

If you want to tell me the three words that describe you, I'm all ears...