Nick Hern – the play's the thing

NED HOSTE SEPTEMBER 23, 2021 HOW TO DESIGN A BOOK AND OTHER STORIES… 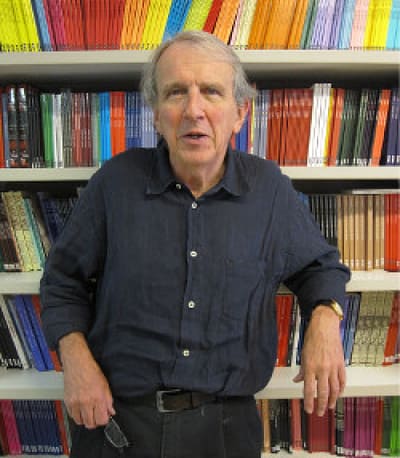 Towards the end of 1991 I bumped into Nick Hern on the third floor of The Random House building in Vauxhall Bridge Road. Nick’s ‘list’ had just become one of Random House imprints, having been part of the Walker Books group since 1988.

Nick was (and happily still is) publishing plays and books on all things theatre. By setting up a specialist list of play scripts and play script programmes sold in theatres, Nick had quickly built on his reputation at Methuen and Walker, as the ‘go to’ man for every new and established playwright both in the UK and around the world. Still in its early stages, the list included notable playwrights such as Nicholas Wright, Caryl Churchill and Mike Leigh. Nick was also, very smartly,  signing up the  performance rights with the authors for their plays giving the list an interest and longevity most publishers can only dream of.

That day Nick was just moving into his new office with boxes of play scripts and books stacked in tottering piles by the lift. Fascinated by the sight I said, “Hello” just to be friendly. 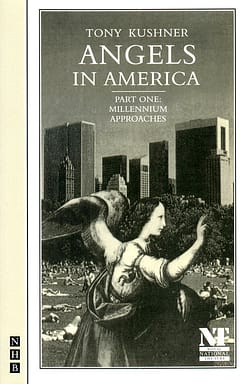 Nick looked up and said, “Aha” and, spying my portfolio, ”a designer, have you got a card?”  As luck would have it I did. “Thanks I will call you when I’ve finished moving in.” I couldn’t believe my luck! I have always enjoyed performance and theatre, and this felt like a golden opportunity for me to expand my book cover work.

A couple of months went by and I hadn’t heard from Nick. Feeing rather thwarted, in the end I called him and was relieved to be met with a warm response, “My dear, Ned, I am so sorry I have had your card on my desk and keep meaning to call. When can you come in?”

Later that week I edged into Nick’s small office, made smaller by the ever swaying piles of manuscripts, printed play scripts and imposing theatre posters. We talked for a while and then he asked me if I would like to work on his covers, of course the answer was “Yes!” It is rare to be asked. My planets had indeed aligned!

To start with Nick just wanted a couple of covers, with a promise of many more to come. The first was a simple job of making a “different but the same” cover for the second part of Angels in America by Tony Kushner. The first part of the play had already opened in San Francisco to critical acclaim and was going to be put on at The National Theatre in London, with Part two: Perestroika, opening the following year. Most of my initial work was around creating updated covers for already published plays in the new house style with a coloured panel and logo down the left hand side. We worked together on these projects off and on for about a year.

Then things went quiet. And, as they say in the films, “Too damn quiet.”

It must have been a bit around November ’92 when I got a call from Nick, not having heard from him since about mid-summer. He opened with, “I have a long story to tell you, probably too long for the phone, have you got time for a meeting?”

“Of course, when do you want me to come in?”

“Oh, not to Vauxhall Bridge Road, would you mind coming to my house? It’s a little hush-hush at this stage.” Well, I am always up for a bit of intrigue and this was intriguing…

“No problem” I replied and the following week I made my way over to West London’s suburbs.

It turned out that Nick was going to take Nick Hern Books independent on the 1st Jan 1993 but this had not yet been confirmed to the trade press. It seemed that Nick’s approach to publishing was very different to that of Random House and a parting of the ways had been on the cards since the summer. Hence the quiet. Nick then asked me if I would like to work on his covers even though, as an independent, the work was on a more precarious footing that before. But when you love the work and have a good working relationship, precarious should never prevent us and the answer was, of course, yes!

“Phew” said Nick, “because I have a playwright turning up in about half an hour and I want you to do the cover for his play. It is scheduled to be at the Royal Court. We’ve no date confirmed as yet, and Stephen [Daldry, newly appointed artistic director at the Royal Court] is going let us know… Tea?”

This was beyond exciting. “Yes, please, white no sugar…”

We sat chatting over our cups of tea in Nick’s back bedroom that was now his office, looking out over the Victorian townhouses and gardens of Acton. In no time at all this modest box room would become the beating heart of Nick Hern Books (NHB) HQ.

To the minute of being expected the doorbell chimed and Kevin Elyot stood on the door step. A thoroughly charming, quietly spoken man, he seemingly equally excited, shy and nervous at the prospect of not only his play, My Night with Reg being performed but also published. Kevin was very keen to use this photo on the front cover and Nick, now free to make his own choices as an independent published simply replied, “Well, why not? Plays don’t sell well in W H Smiths anyway!” Naked male buttocks on a book cover would certainly not have got through  the Smiths cover approval system at the time.

It is always fun working directly with writers and getting a feel for what they want, or, more importantly, what they want to achieve. In cases where you can build a creative partnership I find you get the best results. For Kevin’s cover we only had the budget to print in two colours (this was before digital printing by many years) and by picking the balloon out in red and over printing the black it tricks the eye into believing it is actually more colourful than it really is. Kevin was very supportive and said, “If you promise not to write plays, I promise not to interfere with the design.” He was as good as his word and I have never written a play. I left the meeting with this and a few other covers to design.

We were off. NHB did launch on the first of January 1993 and by 1994 had picked up the Sunday Times Small Publisher of the Year Award. Nick’s list now runs to well over 1,300 books, all of which are still in their current catalogue and many of which have amateur performing rights licences available. You can see the history of the first 25 years here.

The start of a long and fruitful relationship, Nick will pop up again before too long!