About half the work that came into Slatter-Anderson in my day was publicity and promotion, the majority of which arrived from Century-Hutchinson publicity director Susan Lamb. Susan had a fearsome reputation and mistakes were never an option. Susan got on well with Robin Anderson and saw him as a safe pair of hands. I think she believed he did all the work himself and, to keep customer relations sweet, Robin did nothing to enlighten her.

The first few times I met Susan, when Robin was on holiday, she was clearly wary and keen to test me by galloping through the briefs, often three or four in a 10 minute meeting. However, my meetings with Gail Rebuck, who was at the time head of Century non fiction (find out more here), had prepared me well for this slightly alarming technique and, luckily, I have always had a good memory for detail. 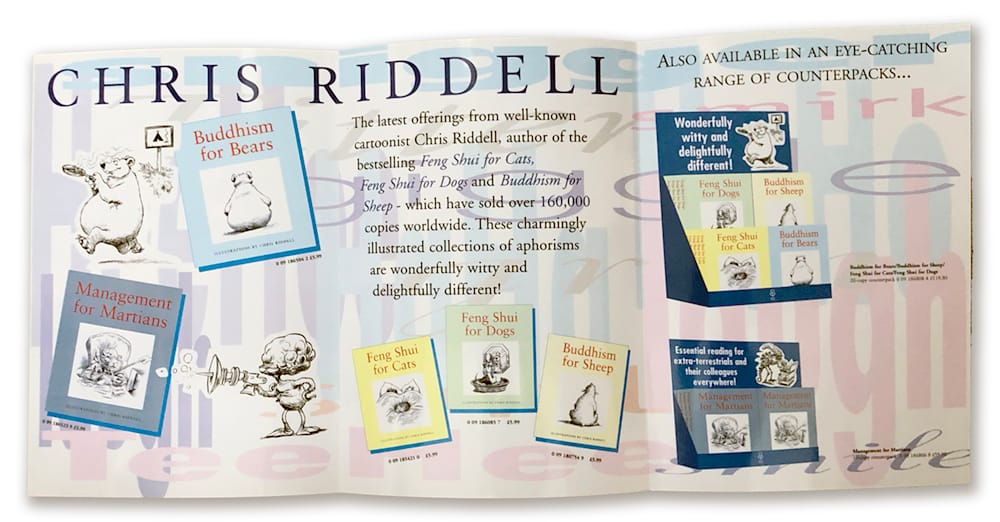 This was the year of the Little Books. No larger than 100mm square were hugely popular. I did the presenter for one of my favourite cartoonists Chris Riddell for a series of books for Christmas. These took a wry, yet gentle poke at the Little self-help books, the most famous of which was The Little Book of Stress.

We did everything from ad campaigns for magazines and newspapers, to posters and point of sale trade ‘presenters’, which was how new book promotions were announced to the trade. Glossy full-colour affairs, the more important the author, the more lavish the promotion and the bigger the presenter. Shortly after joining, Robin decided, for reasons best know to himself, to begin promoting Slatter-Anderson’s capacity to  design trade exhibitions, as well as the promotional material… During my two years with them I designed three exhibitions (including London Bookfair at the Barbican and a merchandising fair for special editions at the NEC in Birmingham) and two sales conferences! 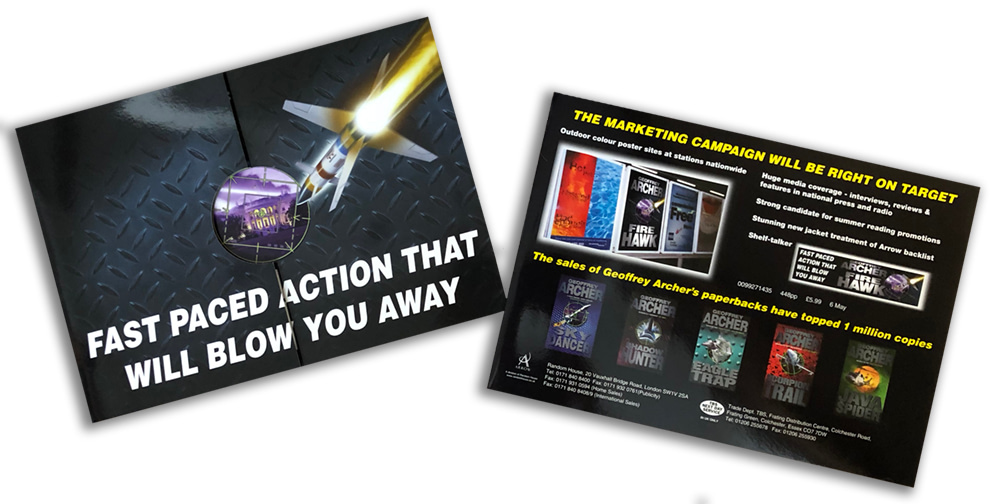 When a prolific author has a new book and his backlist is also recovered then the promotion can be lavish. This included bus stop and tube posters, press and magazine ads and a glossy presenter with cut-outs. Always fun when there is a budget to throw at a campaign.

Back in the late 1980s publishing sales conferences were a big deal. At these events all the new titles for the next six months were announced to both the UK and international sales reps. They were usually held in a large conference or hotel complex and, depending on the reach of the organisation, could last between two days and an entire week.

All the promotion presenters had to be printed and ready along with the point of sale material for the key lead or ‘super-lead’ titles (super-lead titles were essentially lead titles with even more marketing spend thrown at them). All this activity had only one purpose, to get the sales reps so excited that they would go back to their territories and sell the new books into the wholesalers and retailers like they had never sold before.

Back at my first publishing company Sphere Books, we designed our sales rooms to be packed full of promotion packs along with plenty of merchandise and other enticements to encourage large orders. Far larger than the usual exhibition stand, our rooms were fully staged affairs with capacity for about 100 people and, as well as speeches from senior sales and marketing folk from head office, our authors would give talks about their books. During my time at Sphere these conferences always had the reputation of week long ‘benders’ - plenty of drinking, partying and weird games with a few talks thrown in…  This, however, was not the way everyone did it, a fact which became all too apparent on a warm day in June when I met up with the sales director of Century-Hutchinson at Waterloo station to visit a potential venue.

The Sales Director’s name was Dallas Manderson. With a name guaranteed to conjure up chisel jawed heroes in the breast of every Mills & Boon reader, Dallas, however, was a big, quietly spoken, fresh-faced Etonian inside a baggy suit. On the way to the venue Dallas explained how Century-Hutchinson did their conferences and they bore no resemblance to Sphere.

My role was to produce a tasteful and beautiful space that also had the ability to create swift scene changes. I had moved into the world of the literary establishment; from the razzamatazz of mass market paperback publishing to restraint and effortless glamour, I was going to have to have a rethink.

Around this time Slatter-Anderson was also working on promotional work for Bruce Oldfield and I was tasked with designing a 12-page advert for Vogue for his range of tights, which he had designed for Charnos. Variety was ever the spice of life and on another day warm day I headed down to Bruce’s workshop in Fulham to meet him, select the photos and plan the 12 page spread.

I had passed Bruce’s shop in Beauchamp Place in Knightsbridge many times and so expected something equally up-market for his studio. I walked up and down the road a few times and kept passing this door which looked as though it should be the entrance to a dodgy boxing gym. Eventually, I plucked up courage to knock on the door but before I could it swung open and instead of muscle-bound guys with twisted noses and cauliflower ears four extremely beautiful models glided out. This must be the place. I buzzed the intercom and Bruce came down to meet me.

We went up some dark wooden stairs and came out into a big room which was buzzing with activity centred around the most extraordinary gowns. Models were being fitted and make-up tests going on, there was no air-conditioning but the windows were open and I remember a breeze ruffling the fabrics and keeping everyone cool. As we walked through the busy studio it was clear that he was not only respected but very well liked. We sat and chatted for a while in his office and agreed that the stunning array of black and white photos of the product told the story with no need for words. There’s that restraint again… We would have page one with just a white logo out of a black background and then 10 pages of the photos showing off the tights as suitable for all occasions followed by a sign off on page 12. I have no idea how much this Vogue ad would have cost but it would have been significant. I left the office about an hour later with the photos in a large envelope for scanning. As with the times I worked with author Clive Barker, when it came to design Bruce was completely focused and demanding, which is undoubtedly the foundation of his success.

Over the next day or so the artwork was prepared, sent for approval to Bruce and sent off to Vogue. About a week later a package arrived at the studio addressed to me. Bruce had sent me a signed copy of his book to my partner and me. He was the first person I worked with who proved the aphorism of “the bigger the star, the nicer they are” to be absolutely true.

A lovely cover, which I wish I had designed.

Next post: Photoshoots and the birth of 2h Design